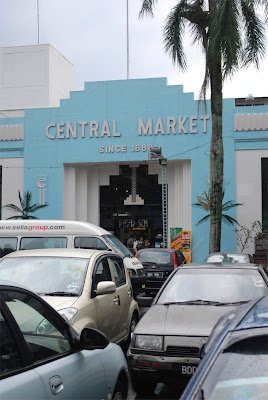 In between meals 1 and 2, we spent quite a while in the Pasar Seni = Central Market, aka Chinatown market. It is packed with stalls, akin to “El Mercado” in San Antonio but imagine changing out the Tex-Mex merchandise for Chinese-Malay-Indian fare. For those of you unfamiliar with El Mercado, it's an indoor mall made up of tiny stores, often selling similar items, and admixed with portable booths as seen in American malls or on Boston Common.

With Palm’s help, I practiced bargaining. We rounded up a few gifts for the family (shhh!). Ricky & Palm were incredibly patient. We ultimately didn’t experience the “Doctor fish,” but you should know about these in case you visit. You pay a small fee to put your feet in a tub with these fish, and they nibble off your dead skin.
Posted by Linds at 5:14 PM No comments:

After a brief eating break, we met up with a special friend of Scott & Palm’s for our second meal of the day. We'll call him "Jay," and I'll tell you more about him in the next post. It was in a restaurant within a mall. The mall was much like an American mall. Now for the food! We tried a few more classics. 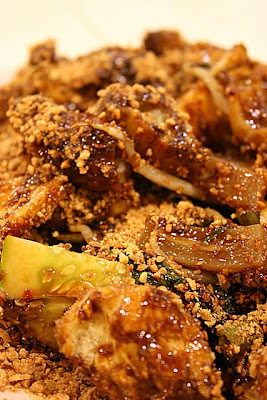 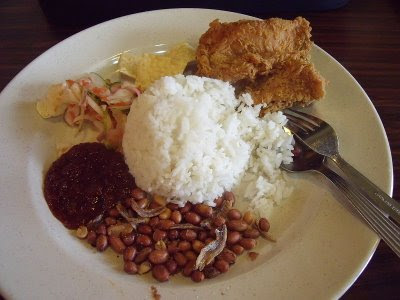 Palm and I ate rojak (top pic) – salad doused in a peanut-sauce dressing that may contain shrimp paste. It was a mixture of familiar vegetables, like cucumbers with a few fruits, one of them similar to a hard pear. The sauce tasted mostly like molasses to me.


Ricky and Jay ate a dish I can’t remember the name of, but it’s supposedly a Malaysian classic combination of rice, chicken, hard boiled egg, peanuts, and dried prawns. 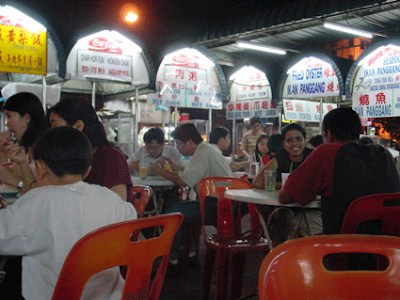 For brunch, we ate at our first Hawker stall. The Hawker stall was a new concept for me, but they truly are EVERYWHERE in Malaysia. It’s sort of a cross between a food court and a carnival food stand. They’re housed in an open indoor/outdoor space filled with chairs and tables in the middle and rimmed by independently operated portable cooking booths that will whip up a selection of dishes. 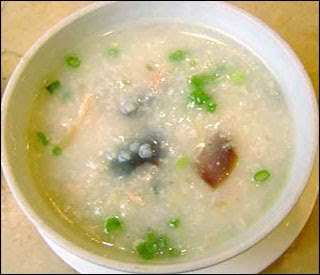 For lunch, Palm had congee (aka Chinese porridge) – think rice made with too much water, cooked much longer and then add bits of chicken, green onion, ginger, cilantro +/- a few other things or variations. 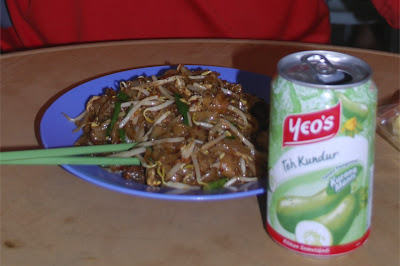 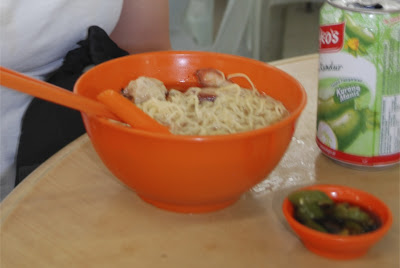 I had Hokkien mee (or I think it was Hokkien mee) – yollow noodles fried with sliced meat, boiled squid, prawns and strips of fried egg. 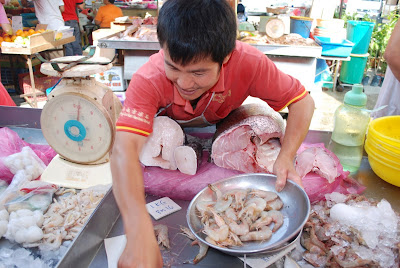 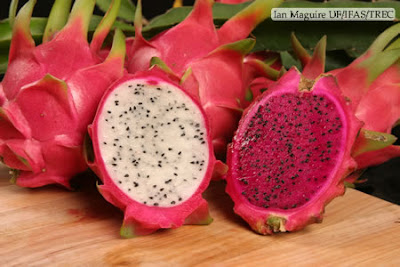 We moved on to the morning market in Bangsar, where Palm & Scott live. It offered VERY fresh food, and some interesting produce I’d never seen. The whole scene was a lot like Boston’s Haymarket. My favorite new sight was dragonfruit, which we got to taste later. We also stopped at the grocer, where there were even more interesting produce choices (like Stink Beans), and a soy products section that puts American grocers to shame. The 5-second version is that we went for a walk, then to an open air market, ate brunch, then lunch (with a very special friend), shopped for souvenirs at the Chinatown/central market, and finished the day with homemade dinner.

And for the longer version, I’ll give it in parts:

We tagged along with Palm on her usual walking loop. It was GREAT to get some exercise after so many hours of travel, but wow were we winded and sweaty. I blamed it on the jet lag so I didn’t get too nervous about our BIG hike later in the week. The most unique feature of the walk were these ‘friends.’
Posted by Linds at 3:29 PM 1 comment: 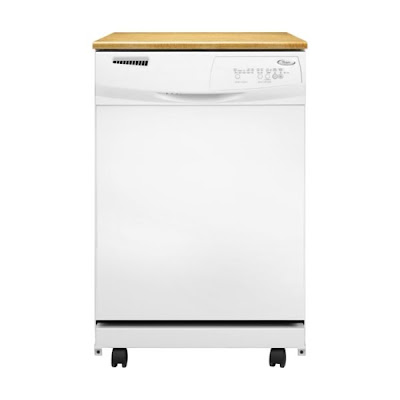 We are in love with an inanimate object. Her name is CLEAN KITCHEN. When our previous junky, portable mini-dishwasher started making the dishes dirtier and our landlord didn't want to replace it, we treated our selves to this bundle of joy. Isn't she lovely? She's bigger, prettier, quieter, and more energy efficient. What more can you ask?
Posted by Linds at 5:00 PM 1 comment:

Now for a photo tour of our first Malaysian meal:

Appetizer: This crispy "cupcake shell" and was filled with stir-fried veggies. 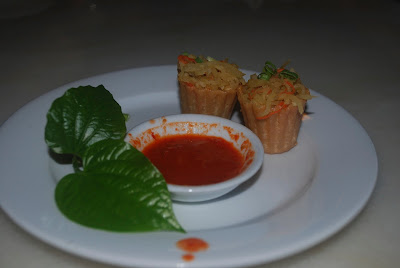 Malaysians love veggies. I think this was watercress with garlic. Even better when served by a ham like this. 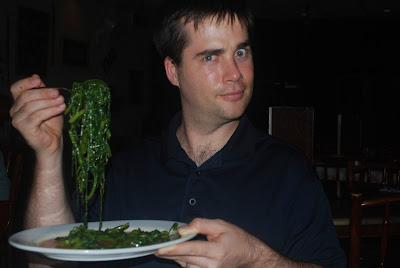 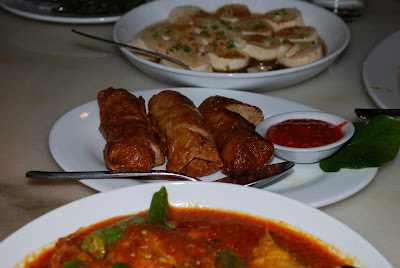 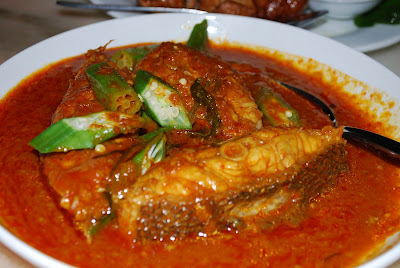 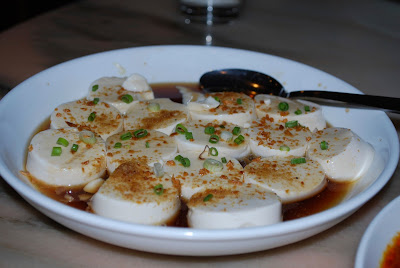 Food played a daily, central role in our cultural experience of Malaysia. Let me give you the intro to that part of the culture, since there will be many photos ahead. I’ve extracted a summary from The Lonely Planet guide. It’s spot on.

“Centuries of trade, colonization, and immigration have left their mark on Malaysia... Nowhere else in Asia are the elements of three great culinary traditions – those of China, India and the Malay archipelago – so intertwined… “ Major flavors are chilies, sourness, belacan (dried shrimp paste), dried seafood in general, herbs like coriander, mint, celery leaves, tumerik, curry, lemongrass, wild lime leaves, pandan leaves (the Malay version of vanilla), sauces like soy sauce, oyster sauce, hoisin sauce, and coconut milk. Both rice and noodles play major roles in the overall culinary scene, with neither one dominating. For protein, fish is the major player, given the lengthy coastlines and abundant rivers. Chicken is next most commonly consumed meat, followed more distantly by beef and pork (Muslims don’t eat pork but Chinese love it). Every Malay meal is balanced with vegetables, and there is an impressive variety including okra, cucumbers, cauliflower, Chinese broccoli, jicama, soy beans, and eggplant. Fruits are also eaten frequently, and nearly every tropical fruit under the sun can be found, including watermelon, pineapple, papaya, guava, dragonfruit, and the stinky durian (loved by some, hated by others). The Malays are crazy about sweets in general. Cakes and pastries are easy to come by, but I found them to be much less sweet than similar American versions. Perhaps the region’s most beloved dessert is cendol, shaved ice and chewy mung-bean-flour ‘pasta’, fresh coconut milk and palm syrup.*

(Singaporean food is very similar.) For photos and a whirlwind tour for some favorite dishes, check out: http://www.cnngo.com/singapore/none/40-singapore-foods-we-cant-live-without-810208
Posted by Linds at 2:37 PM No comments:

Tidbits from our 1st day:
1. You can get a McDonald's ice cream cone for just ~50 cents. We couldn't resist.
2. Malaysia is HOT - all year round! There is a high of about 95 deg F daily, without the heat index.
3. Taxi drivers REALLY want to be sure you don't want a lift. Just give them a glimmer of eye contact (or none at all), and there is a chorus of hopeful questioning: "Taxi? Taxi? Taxi? Taxi? ...ma'am Taxi?"
4. (My favorite) Most natives speak English, and many words are English derivatives. The spellings crack me up, e.g. "Teksi" 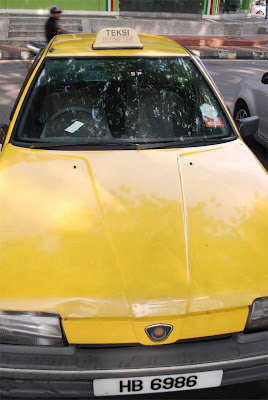 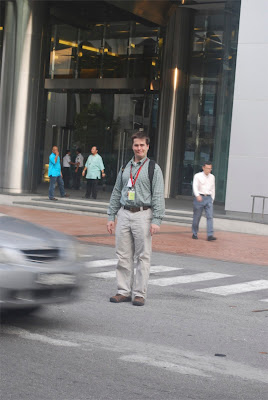 Scott & Palm Update: Scott is putting in long hours for Exxon (where they’re trying to squeeze a 7 year project into 4, ugh). Palm is working part time for her dad’s company (Palm oil plantation) up in Thailand and spends other time being a chef, neighbor, and all around super wife. It was really fun to spend time with these two as a married duo. They graciously hosted us for nearly two straight weeks and still said they loved us by the end of it!

Day 1 Events: Not much big to report. Palm picked us up at the train at around 3 PM. After dumping our belongings, we picked Scott up from the train station. Palm likes to say she’s picking him up from school, and they took us out for dinner at a restaurant. Then we crashed hard due to jet lag!
Posted by Linds at 2:20 PM No comments: