I thought this slide show was fascinating. Check out the "feast" Jesus was eating at The Last Supper.

I visited chef Jan (my mom) this weekend. Here is what she fed me: 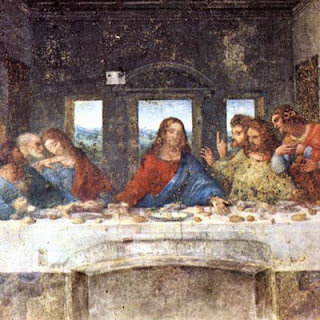 That Jesus ate little more than a few small rolls on His last supper yet I could eat two such meals in the same weekend is food for my reflection. Some of you might not be impressed by the veggies, but if you've ever seen me at a salad bar, you'd know this is just my flavor. I wish He could have had a taste.
Posted by Linds at 7:31 PM 1 comment: 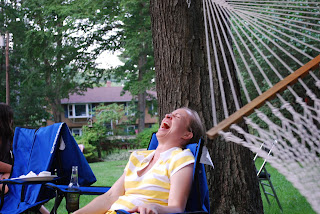 God gave me Ricky, and I am feeling especially thankful. I needed a few laughs this week, and they came...the first two from Ricky.

1) Yesterday evening, Ricky says, "So I had this awesome dream last night...(pause deep in thought obviously enjoying the memory)...I was in an ANTIGRAVITY room..."
This is where I stop and laugh, not AT him, just out of my joy over where his mind goes with it's completely liberated. So then I apologize for interrupting and ask him to continue.
He says, "There were moons everywhere, and I could pick them up and toss them around the room." Then he re-creates his moves, tossing planets around like frisbees.

2) No more than 30 minutes later, we take a trip to Trader Joe's. As we walk into the store, Irish music is playing. We're standing in the entryway, between the cheese and the bananas, with no fewer than 30 people within sight of us, and Ricky starts doing his version of Riverdance...all 250 lbs hopping up and down with pointed toes and all.

3) Today I'm riding home from work on my bike and a guy across the street (4 lanes over), with the window down, shouts, "HEY BUDDY!" I think, hmmm, "Is that meant for me? Or maybe some GUY in one of these cars?" Then he says it again, louder, "HEY BUDDY!" Now he's gotten out of his car and staring straight at me. I crack a huge smile and yell back the directions he's after. The funniest part is that this is not the first time I've been called "Buddy" on my bike. The police officer did it just a few weeks ago. My only probable conclusion is that I'm so stinking fast that there is no chance I could be a girl. Or could it be that I'm just that manish? Time to stop taking the 'roids.
Posted by Linds at 3:11 PM 2 comments: