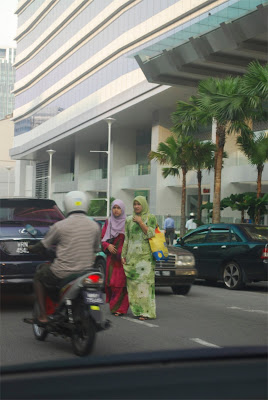 (The following is a prelude to my next story about lunch with “Jay.”)

Malaysia is about 55% native Malays, 25% Chinese, 7% Indian, 11% other local indigenous people, and 1% other. Malaysia is considered “multicultural,” which it definitely is, but it was a very different feeling being in the <1% category, as compared to multicultural America, where I am among the majority.

Islam is the official religion of Malaysia, a religion thought to have been brought over by Indian traders. Muslims make up 60% of the population. There are 20% Buddhist, 9% Christian, and 3% traditional Chinese religions (Confucianism, Taoism). Religion is heavily tied to one’s country of origin. The Malaysian constitution guarantees religious freedom, however all ethnic Malays are constitutionally defined as Muslim. This was an interesting concept for me. The Malay are technically allowed to leave the religion, but in doing so, they lose certain privileges and must go through a formal process. Muslim women often work, but are required to wear headscarfs at all times. As much as I would hate wearing so much clothing while living essentially on the equator, I loved this niche of fashion. If it were me, I’d have to go for black, since I’d be sweating through my headscarf on a daily basis.

Privileges of being Malay: The native people are more broadly considered “Bumiputera.” When Malaysia became independent from Britain in 1957, most Bumiputera were indentured laborers, whereas Chinese were significantly involved in the commercial sector, and the new government felt it was appropriate to give the natives a leg up in their homeland. The new economic policies include preferential entry to public tertiary education, projects earmarked for Malay contractors, minimum percentages of bumiputra in business ownership, employment, and housing development ownership. It is an interesting concept, given that the Malay are of the overwhelming majority. The efficacy and fairness of policy is a subject of debate and flux.
Posted by Linds at 3:50 PM No comments: