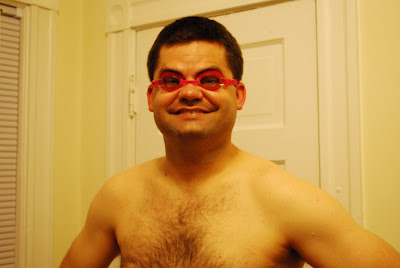 My big blue-eyed husband has taken off on an excursion to Germany, a European country where he can actually blend in. The mission is to fix a work-related problem, so hopefully the fix will come sooner than later and he can enjoy the trip a little. It struck me that it has been quite some time since the old medical school days of living 200 miles apart. I'm a little spoiled now. Since HE's the one that took off and left me here all by my lonesome, I'm going to take this opportunity to be mischievous. As many of you know, Ricky has been training for a triathlon. I'm so impressed with all his hard work, particularly in the swimming pool, where he doesn't have a tremendous amount of experience. Lately he's been working on "equipment." You might ask, "Just how much equipment can you use in a pool?" Well, he has upgraded in several areas, such as cheap plastic lap-counters to a watch that counts for you. He has bought a swim cap, and he's been shopping for a wet-suit. He has come a long way. Just because I think you'll be wondering by now...he's still the only one in the pool with swim trunks. (Excluding the drag from his trunks) nothing slows him down, even if the only pair of goggles left in the store belongs on a 10 year old girl. You'll be thankful to know he's made an upgrade since then, but aren't these fabulous? If I had the time to get on the sewing machine, he'd also be wearing a pink satin cape in this picture.
Posted by Linds at 4:29 PM 1 comment: